On this day, 15 years ago, almost 3,000 people were heinously killed in the terrorist attacks that took down the Twin Towers in New York City. With horrible attacks on our country, however, comes remarkable innovations and changes in the way we live our lives.

Let’s talk about robots. A robot called Packbot was in the middle of laboratory testing when our country was attacked on 9/11. Without hesitiation, the Packbot was sent in to help dig through the rubble to find survivors. Although the Packbot was not invented as a result of 9/11 disasters, its success during the tragedy caused robot technology to grow rapidly. This science is only expected to get stronger and wiser as a result of the tragedy. I find this to be interesting when talking about correlational and causation because, although disasters do not directly cause robot innovation, they cause the strength of the technology to improve; tragedies like 9/11, in my opinion, are correlated with the growth of robot technology in one way or another. The physical breakdown of the Twin Towers led scientists to find better ways to design skyscrapers. For example, the One World Trade Center is designed with steel floor assemblies to prevent a domino effect if one floor fails. Science is also to thank for the invention of elevator lifeboats, or elevator-type vessels that can be used in emergencies such a 9/11 (as explained by the author hyperlinked above.) I think 9/11 is a direct cause of these modernizations considering they are located in the heart of New York in the building that stands to replace the Twin Towers.

Now let’s talk about some effects that aren’t as obvious as security and technology innovation.

This article claims that 9/11 is to blame for thousands of deaths due to car accidents. Because many Americans did not feel safe travelling by plane, they simply drove to their destinations. As logic would suggest, car accidents are already more common than plane accidents because most working Americans drive nearly every day. In the year following the terrorist attacks, air travel dropped by twenty percent; subsequently, according to this source, there were an extra 1,595 deaths by car accidents. In my personal opinion, this could potentially be causation, but one can’t automatically assume that all 1,595 people were choosing to not fly in planes and this was the cause of their deaths. I also think there could be other variables in play. Maybe alcohol prices went down. Maybe gas prices went down. Maybe this was a fluke.

Here’s the strangest thing I found—America got hotter. Why? Bare skies. This article states that, as a security precaution, our government grounded every last plane in the entire nation. The reason our country got hotter is due to something called contrails. Contrails are the trails of vapor that come out of planes; these trails have a hand in offsetting global warming. The author of this article discusses that these vapors acted as mirrors—therefore, when the skies were completely empty, the skies had virtually no defense against heat. As a result, the temperature in the US went up two degrees in three days. This article makes the comparison that global warming usually causes a .5 degree increase every year… that means the temperature increased 400 times the amount it usually increases in an entire year in just two days. 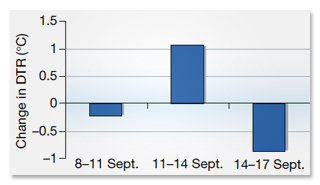 I’m going to have to go with direct causation on that one!