A lot of commotion has been stirred up over the NFL’s handling of head trauma injuries. The league has been forced to make new rules and regulations regarding proper tackling form and post-concussion procedure. However, head injuries only take a player out of the game for a few weeks. The true career changer is an ACL tear.

The ACL is a ligament in the knee that connects the two major bones in the leg. When this ligament is torn, the injured person can’t walk. The surgery is extremely invasive and can keep a player from physical activity for up to a year. Once the player returns from the injury, the chance of re-tearing the ligament is high. Most players return to action wearing a specialized knee brace.

The injury can occur when a player makes an unnatural lateral cut, the leg is hit at an awkward angle, or when doing simple movements. The randomness and recovery time of tan ACL tear make it one of the most feared injuries in the NFL. USA TODAY sports columnists Peter Barzilai and Erik Brady found that 46% (of the 293 players they polled) said they feared leg injuries the most compared to the 26% that said they fear head injuries the most. 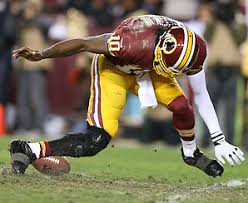 So why is it such a big deal in the NFL? Football has many aspects that make the players susceptible to ACL tears. Evading defenders requires constant lateral movement. The body is constantly shifting weight in order to brace for hits or break out into open field. Cleats, which help the players traction, actually increase the amount of stress on the knees during play. NFL teams invest millions into the players on their squad. When these injuries occur, the teams still have to pay the money that is determined in the players contract. For instance, when Teddy Bridgewater, the Minnesota Viking quarterback, suffered an ACL tear in training camp, the Vikings had to trade away multiple draft picks and millions of dollars to acquired new starting quarterback in Sam Bradford.

Therefore, it is surprising that NFL teams do not investigate more into the prevention of ACL tears. Even though head trauma can truly ruin a players life, it financially makes more sense for teams to stress leg injury prevention.

5 thoughts on “ACL in the NFL”