Imagine traveling 800 miles an hour and not feeling a thing, this is the idea that the Hyperloop offers. The Hyperloop is basically a train that travels in a low pressure tube at super high speeds.  This idea was brought forward by one of tesla’s founders Elon Musk.  In 2013 Elon Musk opened the Hyperloop up to the public asking anyone from any age to help with any idea they

Simply put the Hyperloop works by having a shuttle in an enclosed tube that will have low pressure to reduce air resistance and allow for higher speeds. To picture it, picture the tubes they use at banks and mailrooms to move paper really fast. The pods will fit about 28 people and have the ability to leave every 30 seconds according to Meghan Kelly.  There are currently 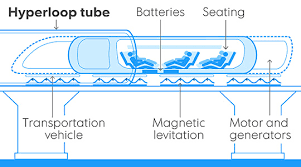 two designs one where air is pumped in and one where the pods float due to magnets.  Both of these designs have the pods floating in the tube(How Science works).  By doing this it causes less friction and therefore greater speeds.  Elon says that the passengers will only feel an initial push like on a plane and after that feel nothing. There will be Linear induction motors along the tube to keep the pods traveling at high speeds.  The Pods will be powered by batteries that are used in tesla cars and by the solar panels on top of the tracks.  The most amazing thing besides traveling over 700 miles an hour is that this will only cost 6 billion dollars. This may seem like a lot of money but compared to the 60 billion that is going to be spent on bullet trains it is a lot cheaper.  Getting a mode of transportation that goes almost 400% faster at a tenth of the cost shows why the Hyperloop is a better option.  Now this cost is only the cost of construction of the final project and doesn’t take into account research, development, and testing (How Science Works).

There are currently two companies competing with each other to design the Hyperloop first. The two companies are called Hyperloop One and Hyperloop Transportation Technologies (HTT).  Both companies plan to have a full scale test track built by 2020.  A test was done in May by Hyperloop one to test the propulsion system of their Hyperloop.  The link to the test can be seen here. Both companies believe that the first Hyperloop won’t be built in America but rather in the UK or Singapore. According to Hyperloop One’s CEO they believe that it can start to move cargo by 2019.  This seems like a stretch, according to Michael Grothaus he believes that this technology may still be decades away.  I hope that this technology is widely used in my life time I think that this technology would be very cool and solve a traffic and travel problem in this country.

7 thoughts on “Hyperloop: The future of travel”