Ever since 9/11 airport security has gotten a lot sticker, or so it seems.  This blog post is about whether the changes in TSA procedures are actually making us safer.  According to Jennie Burger the TSA missed percent of fake bombs during random testing.  This percentage was shocking to me and I later found that there is currently no evidence of TSA actually stopping a terrorist attack 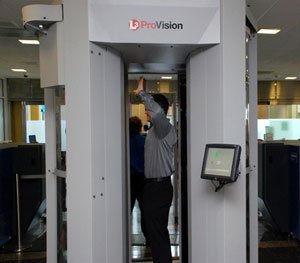 was unsuccessful because the bomb did not detonate on the plane not because the man was stopped at a security screening.   Now after the shoe bombing attempt passengers have to take off their shoes going through security.  This is a way to stop another shoe bombing from happening again it doesn’t stop other types of threats.

I got the idea to write this blog from a tv show I was watching called Adam Ruins Everything.  He has an episode where he says everything that is wrong with the TSA that can be seen here.  In the show Adam says how since 9/11 the efforts we are making in airports are not helping as much as other things we changed during flying.  What the TSA has been doing is called security theater.  Security theater is when you look like you are making a change for the better but it is actually doing nothing (Wikipedia ).  An example of this is again, how you now have to take off your shoes, this is a counterfort that makes it look like the TSA is trying to make us safe.  The disadvantage of security theater is that it’s really expensive.  Now having people take off their shoes doesn’t cost the TSA money but other changes they have made do.  Now instead of the traditional metal detectors everyone has to go through full body scanners which cost about 160 million in total according to Jennifer Scholtes .  These body scanners aren’t any better than what we had before but it looks more advanced so people feel better.  Security Theater can be dangerous because it gives people the illusion that they are safe when they really aren’t (Wikipedia).  The changes that have been made that are making a difference include more air marshals on flights, better protection of the cock pit, better intelligence of possible terrorist, and ultimately the public being more aware. Going back to the shoe bomber when the bomb failed to detonate the passengers were the ones who stopped him.

2 thoughts on “The Truth About Airport Security”