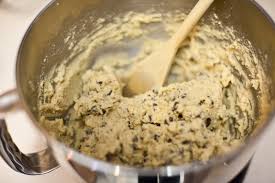 While making cookies with my family I was wondering about what the real reason is that we shouldn’t eat raw cookie dough. Most people usually assume that you shouldn’t eat raw cookie dough because you run the risk of getting salmonella from the raw egg. But what if I told you that wasn’t the only reason? Studies show that it is not only is raw egg, but also flour that is making people sick. A recent report says that General Mills flour has sickened 45 people and has made a recall of 45 million pounds of its product. But why? What could be affecting flour in a way that its making people sick? Officials from the Food and Drug Administration analyzed samples of the flour and found that it was contaminated with two separate strands of E-Coli. Investigations have led to the disease being present in other sprout based food sources, but never flour.

So how did the E-Coli get into the flour? Because wheat is not usually treated to kill bacteria, the product is more susceptible to pick up the disease. If livestock defecate in the field, then it increases the likelihood that the grain will pick up the bacteria that’s been causing so much illness. So what is the disease doing? The disease has been causing diarrhea and abdominal cramps. Some symptoms last longer than a week and persist such as Kidney failure. The disease has spread across 21 states. The FDA is aiding GM in the process of eliminating the disease in their products.

When eating raw cookie dough, you should always be cautious. First and foremost, the consumption of raw egg is unhealthy. Furthermore, General Mills recent recall makes the decision even riskier. But what if you’re like me and you enjoy raw cookie dough and kind of don’t care? Just wait a while…..In the not too distant future, GM’s recall should be over and the flour they produce should be E-Coli free once more.

So what can be taken away from all of this? First, if you have any General Mills products containing flour, you best throw them away. Second, avoid consuming any products containing raw flour. And Finally, eating raw egg is never a good idea. So the next time you’re making Chocolate chip cookies, think about what ingredients you used before you take a bite of the raw dough.

8 thoughts on “Cookie Dough: The Truth Behind the Batter”