When I was in middle school I went to the Holocaust Museum in Washington D.C. for the first time. As I was walking around I came across the section of the museum that talked about the experiments doctors would do on certain types of patients. One of the experiments they had done was with twins. They would harm one twin and see if the other could feel it. This really hit home with me because I am Jewish and I have a twin. It got me thinking, “Can one twin feel pain or feelings that his or her twin feels?”

The first article I came across was about a set of girl twins. Twin A was taking a bath and Twin B had a strange feeling to check on Twin A. As it turns out Twin A had a seizure and was drowning in the bathtub and when Twin B found her, she had turned blue. Twin B performed CPR and was able to save the life of her twin. Stories like these usually happen between identical twins (twins who look alike), but these girls are fraternal twins (twins who do not look alike). Their mother said that even though the girls are fraternal twins, they are very close and share a special bond. Dr. Lynn Cherkas concluded that 20% of of identical twins have experienced some type of telapathy with their twin and 1% of frateranl twins had some form of telapathic experience.

The articles I have come across have mostly been stories of one twin obtaining the skills another twin has. Such as one twin taking guitar lessons and after some time the other twin could play just as well, even though he had never taken any lessons at all. Most of the stories I have come across are between identical twins rather than fraternal twins. Identical twins (also known as monozygotic) seem to have a better connection because they come from the same egg.  Fraternal twins (also known as dizygotic) come from separate eggs. 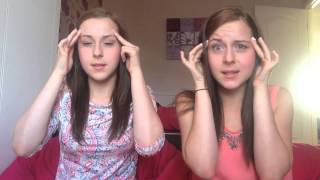 Even though multiple studies have been conducted dealing with twin telepathy, I have not been able to find any scientific proof. This article talks about how the bond between twins might just only be a bond and nothing more. They also bring up the story I mentioned earlier about one twin drowning in the bathtub. Twin B might have felt the need to check on Twin A because she had known her twin was prone to having seizures. It could have just been a coincidence.

These scientists conducted an experiment with twins where one twin had to pick a card with a shape, telepathically communicate it to the other twin, and have the other twin pick the same card. The scientists stated that about 50% of the time, the other twin picked the correct card. When scientists decided to pick the card for the first twin, the second twin only picked the correct card about 25% of the time. They concluded that the twins picked the same card because they had similar preferences, not because they were telepathic. Similar experiments could be conducted with other family members and the results would come out the same. These scientists do not believe it to be any type of paranormal or telepathic activity, just families having similar preferences due to living together and being around one another frequently.

Despite what the scientists in my last article said, there are still plenty of articles talking about phenomena related to twins. Some are more explainable than others. My sister and I have never felt anything telepathic related to each other but it is interesting to see that other twins have had these experiences before. I think something like this could be possible. Despite others opinions, there have been instances where twins have had some sort of telepathic experience and I think it is something that should be studied more.