I know I’m not the only one that has ever wondered if my pets actually love me or if they just like me because I pet them and give them food. And in addition to that, if they do really love me, is it the same kind of love I feel for them?

According to Dr. Nicholas Dodman on PetPlace.com, yes, our pets do indeed love us. Dr. Dodman states that clinical evidence has shown that the heart rates of both dogs and cats decreased when they were in the presence of their owners. This signals a bond between an animal and its owner.

Let’s start with man’s best friend – dogs. Theresa Fisher, a journalist who writes for a website called Science.Mic, wrote an article about brain scans that were done on dogs in order to figure out what they really think about their owners. According to Fisher, these scans have not only revealed that dogs love their owners, but that they also consider them family and depend on them before they would other dogs. Fisher explains that because dogs navigate with their noses, animal cognition scientists at Emory University performed a neuroimaging study on how dogs’ brains process odor. This study provided the greatest evidence that dogs love their owners by discovering that the smell of a dog’s owner triggered the “reward center” of the dog’s brain. This makes total sense because whenever I’m at a friend’s house who has a pet and I come home smelling like the animal, my dog will sniff me up and down for 5 minutes to try and figure out why I smell so different. I’m sure I’m not the only dog owner who has experienced that. Another neuroimaging study done by researchers at Eotvos Lorand University in Budapest showed that the same happy sounds triggered the auditory cortexes of both dogs and humans, proving the bond between the two. According to the study, this is why dogs know when our mood changes. Has your dog ever laid with you or licked your face when you were upset? Well, if so, now you know why. Attila Andics, a neuroscientist who was involved in the study, says that dogs look to their owners for protection much more than other animals, such as cats and horses. While these animals run away when they’re scared, dogs run straight to their owner. Andics points out another unique characteristic that dogs have that almost no other animals do; they make eye contact with their owners. I find this to be very much true because whenever I talk to my dog, she not only looks me in the eye, but often tilts her head back and forth as if she is interested in what I’m saying. 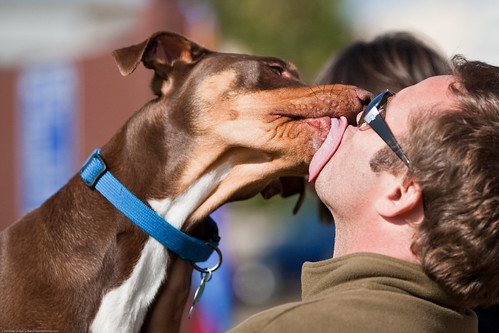 Here’s a video about 5 simple ways to tell if your dog loves you.

The next furry friends we’re going to talk about are cats. Of course, there will always be that person that says cats are evil and manipulative, but that just isn’t the case. Rafi Letzter published an article on a website called Popular Science that proves cat haters wrong. In this article, Letzter states that he called a guy named Bradshaw, who is a well-known cat and dog researcher. Letzter makes several points that prove that cats are as evil as they are made out to be. He explains that cats are very independent. Unlike dogs, if put in an unfamiliar situation, cats will explore independently. Hence the saying “curiosity killed the cat.” Cats are always curious and like to explore new things and places. He goes on to say, though, that this does not mean that your cat doesn’t love you. He uses the example of couples at a party. Some couples are attached at the hip, like a dog would be to its owner, while some couples split up the second they enter a party and do their own thing, like a cat would. Just because the couple doesn’t stay right by each other’s sides doesn’t mean they don’t love each other. The next point Letzter makes is that cats do, in fact, show affection. Many say that cats only rub up against things to rub their scent gland secretions on them and mark their territory, but if that was true, cats wouldn’t rub theirs sides against anything because there are no scent glands on their sides. Yet, cats rub their sides against us all the time. That, along with purring and cuddling or sleeping with us, Letzter says, proves that cats show affection. If your cat is anything like mine, you can’t lay in bed for two minutes without her following you into your room and plopping herself on your chest, purring away all the while. Another point Letzter makes is that unless your cat was born in the wild or on a farm, it probably isn’t the murderous predator everyone makes cats out to be. Letzter explains that hunting prey is taught by the mother cat in the first eight weeks of life, but if born from a domesticated cat, your cat will not learn or ever possess the hunting skill. Here’s a video that shows how cats express their love for their owners.

It is safe to say that despite much skepticism, our pets usually do love us and enjoy having us around. If you can recognized any of these pet behaviors to be familiar, you know for sure your pet loves you very much!