My all-time favorite movie since junior year of high school has been a documentary you can find on Netflix called Blackfish. This popular depiction focuses on Sea World and the detrimental effects it has on whales by captivating them. I tried to make my dad watch the documentary with me one night and he refused to. He is by no means an animal hater (his best friend is my dog), but he disagrees with the protesting and media attention that surrounds Sea World these days and thinks the media should focus on more important things. He believes Sea World’s claims: that Blackfish is filled with lies and false propaganda. I decided to write a blog aimed at convincing my dad why the whales in captivity should be set free. Blackfish follows the life of the whale Tilikum, a thirty-five year old Orca whale who has been in captivity for most of his life. He has killed three people most notably his trainer, Dawn Brancheau in 2010. While Sea World claimed Dawn knew not to get into the water with the whale, The documentary goes onto explain that Tillikum’s aggressive behavior is due to his claustrophobic environment and CNN reports the suggestion that the whale has some type of mental illness due to his surroundings. Orca whales are known to be communal mammals who travel in pods. Being separated from their families when captured or having captive whales lose their babies to another theme park has proven devastating to the animals and spikes their stress levels. Now an animal’s stress may seem like a joke at first but the WDC explains that when these animals are distressed, they can go into an almost depression-like mode where they refuse to perform in shows or lash out at their trainers.

The whales bodies are distorted as 1% of the wild population of whales have their dorsal fins collapsed where as 100% of captive male whales have a collapsed dorsal fin due to the shallow waters of their environment. 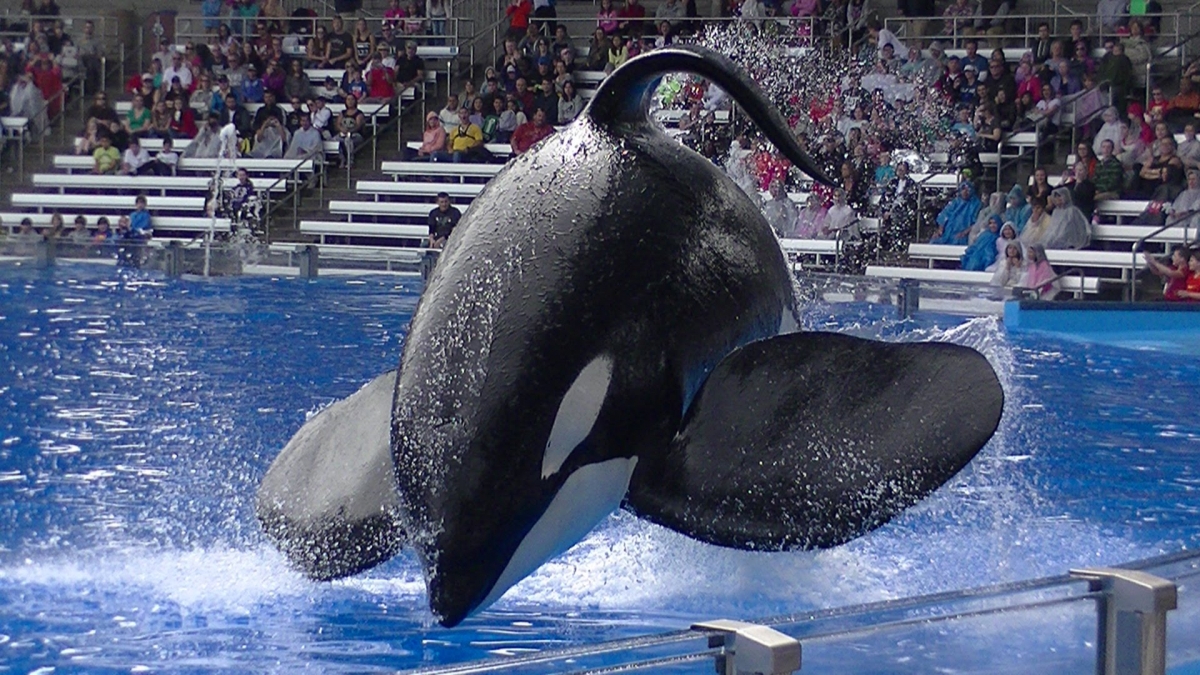 Tilikum with a collapsed dorsal fin

Now while I do believe whales should not be in captivity, I did find a part of Blackfish that seemed to be completely false. At one point in the documentary, the people narrating it claimed that Sea World’s whales live to thirty years old while in the wild they can live up to eighty years. The documentary then goes onto say that Sea World lies on their show tours and say that the whales live to thirty years on average to cover their reputation. After my own research, I found the whales in the wild have a range of living from 30-70 years and the data is not an average of eighty years as Blackfish suggested

Whales suffer immensely in captivity and it should no longer be allowed. Although Sea World has decided to no longer continue their shows, they still are keeping the whales to be observed by the public. However, make sure to always fact-check topics you find interesting. Although I found Blackfish to be very informative, one entire point in their argument proved to be erroneous

4 thoughts on “Free the Whales”