Last year in my political science class my teacher showed us a documentary on solitary confinement in prisons. I don’t remember why he showed us this, I just remember the video and the impact it left on me. In the documentary, they interviewed a few of the prisoners housed in a prison that was entirely solitary confinement. The impact that being in a prison like this had on these men was staggering. It actually had me tearing up at some points. I felt pity for these men. Many of them didn’t commit crimes that I believed deserved that sort of punishment. I looked for the documentary and I ended up finding where you can watch clips from it here. I highly recommend you watch these if you’re curious on what made me start thinking about this, it’s intriguing. 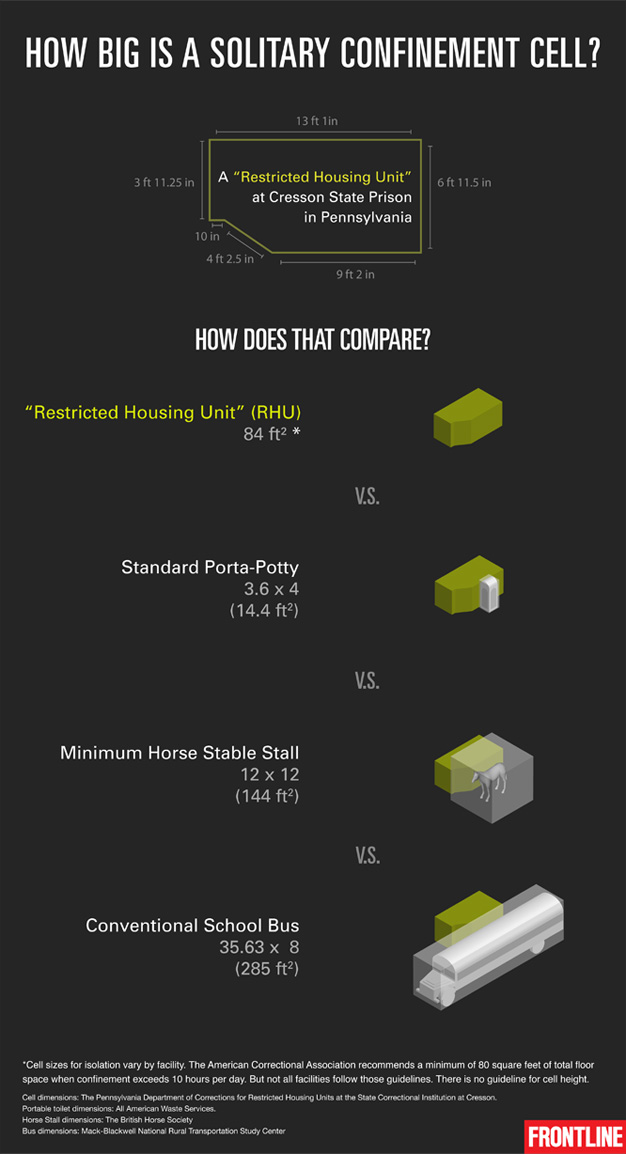 Constant solitary confinement is truly a horrible thing; humans are social creatures, we actually need to socialize to stay mentally healthy. It used to be, back in the 20th century, that solitary confinement was relatively rare and rather short. It would be used, and still is, either to keep inmates from harming the staff or other inmates, to keep inmates from escaping, or to punish them for misconduct. Solitary confinement used to last only a few days, or even weeks. Now, however, inmates are kept in solitary for years at a time. Some are even kept there for more than twenty years.

While solitary confinement used to be somewhat sparse, there are now super-maximum security facilities in more than forty states. These facilities are also called “supermax” facilities, and were actually designed for the purpose of holding people in isolation for long periods of time.

But what exactly is it about solitary confinement that is so bad? What are the effects that solitary has on people? Well, when inmates are held in solitary, they spend 22-24 hours a day locked in a cell that’s only about 84 square feet. These cells only have a bed, sink, and toilet. Inmates get their food through a slot in the door, and are allowed only an hour of exercise a day. They have extremely limited contact with other humans, and oftentimes the contact that they do get is negative in nature. They get very few personal effects, no contact with family, horrible medical and mental health treatment, and are frequently subjected to physical and emotional torture. This, as anyone could guess, is very detrimental to the physical, and especially mental health of all inmates who go through it.

Dr. Terry Kupers, a professor of psychiatry, has spent over forty years studying the effects of solitary confinement on the mind and body by interviewing thousands of inmates. In this article, Kupers talks about the human need for social interaction and activity. Socialization and creation are two ways that we learn about ourselves and stay self aware. Inmates in solitary are deprived of both of these things; they spend their days alone and inactive. I can only imagine what this means for the people who go through this.

Kupers describes long-term confinement as being about three months. Studies have shown that nearly all inmates who are kept in solitary for that long begin to experience high anxiety, panic attacks, paranoia, anger, and compulsive tendencies. Inmates often start to pace or repeatedly clean their cells. In addition to these affects, they suffer from dulled cognitive functions; for example, when reading a book they tend to forget what had happened just a few pages before. Actually, in the documentary I mentioned at the beginning of this, I remember watching clips of the prisoners pacing back and forth along their tiny cells for hours. In some cells, the floors were literally worn down from their footsteps. The only thing these prisoners have to do is sleep, pace, work out, and repeat.

One of the effects I find possibly the most horrifying is what happens when inmates who suffered through solitary are finally released from isolation. While in solitary, their brains have been put into a stupor; they’ve been pushed nearly to the edge of insanity. This delirium is something many cannot and will not recover from. So, when inmates are let back into even just the general population, not even the outside world, they become overwhelmed by their surroundings and can’t handle the environment they haven’t experienced in months or years. Their brains waves go all over the place. Inmates have said that it’s a terrible experience, and often will not leave their cell for fear of being around everyone else in the general population.

Another psychiatrist, Stuart Grassian, has conducted studies and interviewed hundreds of prisoners. One of these studies yielded results that showed that about a third of the inmates showed psychotic and suicidal tendencies. Grassian has also concluded that being in solitary confinement can cause a psychiatric syndrome in which inmates experience hallucinations, panic attacks, and many other symptoms consistent with those that Dr. Kupers observed.

Grassian and Kupers are in no way the only people to conduct studies on solitary confinement that came to same conclusions. Hundreds upon hundreds of studies have been done in dozens of prisons. Solitary confinement and mental health issues in inmates clearly share a direct correlation. Solitary is, almost without any doubt, the cause of so many mental health problems within prisons. There is nothing really that could be considered a third variable that may be causing these problems. Solitary confinement is at fault, no question. But the question we can ask ourselves is, do we condone the use of this form of torture in prisons?

4 thoughts on “The Evils of Solitary Confinement”