It should come to no surprise that I, just like everyone on this planet, love drinking water and spreading the good word about the benefits this miracle liquid offers to those who drink enough of it daily. Yet, it recently dawned on me that when I am drinking water, most of the time it is straight from the tap. Given a number of controversies with what is found in tap water, it got me thinking about the involvement of fluoride within my everyday life, and just how frequently this chemical seeps its way into my body. So in this post, I wish to propose the question of whether or not tap water with fluoride in it actually has any sort of foreseeable negative side effects, and whether or not I should make the swift switch towards buying bottled water instead of bottling it myself straight from the tap. Fluoride has been introduced into the United States’ water supply since 1945 where it has since steadily rose over the course of 60 years to be included in almost all major United States cities as it currently is today. The arguments arose for the inclusion of fluoride into the public supply before the 50s, and it’s introduction is mainly credited to a Dr. H. Trendley Dean, who, according to the National Institute of Dental and Craniofacial Research, conducted a large scale study of schoolchildren in Grand Rapids, Michigan by making the city the first in the nation to introduce fluoride into its water supply. As a result of the 30,000 children monitored over the course of a decades long period, tooth decay had declined significantly, about 60%, and since then, fluoride was introduced, and has remained, within our water supply – like two peas in a pod. 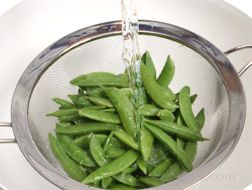 If Those Peas were Elementally Treated, of course. Source: http://files.recipetips.com/kitchen/images/refimages/kitchen_advice/fruit_veg/peas/prep%20and%20cook/pod%20peas/sugar%20snap%20cole%20slaw/rinsing.jpg.

Just last year however, the United States government, for the first time since the fluoride measure was introduced, actually lowered the recommended amount of fluoride in our water supply from between 0.7mg/L – 1.2 mg/L to just 0.7mg/L as the highest limit, according to the United States Dept. of Health & Human Services. The government argues that the introduction of various sources of fluoride through the use of mouthwashes, tooth paste, and other drinking sources within the last few decades is actually doing more harm than good for our children, and thus the descaling of the fluoride is necessary for societal health.

Even with all of this influence of fluoride in our everyday lives – is it actually damaging? Not necessarily. Out of numerous studies, which are highlighted in a nice meta-analysis of about 50 total studies done over the past few decades being compiled by the American Cancer Society, hardly any conclude with solid evidence that fluoride within water supplies actually causes cancer, or any other types of bodily damages for that matter. Only in extremely high doses, according to the Cancer Council of Western Australia, is fluoride actually at risk of causing some damage to your bones or teeth over a prolonged period of time.

So, what have we learned today? Water is of course a fantastic resource responsible for almost all life on Earth, and without it we would surely parish. However, drinking tap water, or even bottled water, which also contains unregulated amounts of fluoride according to the Center for Disease Control, at this time is perfectly safe and not harmful in any way, shape, or form. Thus, the hypothesis that I portrayed above is to be determined as a null hypothesis – meaning that there is no actual relationship between an unhealthy life and the consumption of water containing levels of fluoride. Had there been sufficient enough evidence, or even if stronger evidence somehow arises in the future, then perhaps my current water drinking habits would be likely to change. Based on the evidence I have compiled through the numerous studies done over the past half century, it would be foolish for me to actually stop drinking tap, or even bottled, water at this point in time due to the fact it contains fluoride. Unless I start consuming toothpaste or mouthwash at an alarming rate, or move to an area plagued with high concentrations of fluoride, I should have nothing to worry about for the foreseeable future.

Thanks for reading this post! Have any comments or questions? Disagree with something I said? Want to learn more about the Great Emu War? Feel free to leave a reply!

2 thoughts on “Water, Fluoride, and You – A Deeper Look Into Fluoride within Water Supplies!”