Staying hydrated is one of the most important habits in human health.  But we’ve all had days where we somehow just forget to drink enough water.  Days after these are when we wake up with chapped lips and suddenly attempt to re-hydrate.  This morning was one of those times for me, except not only did I wake up with the dire need to quench my thirst; it felt as though my brain was foggy for the entirety of the morning.

This got me thinking.  Could hydration mean something more than physical wellness?  Could drinking enough have a direct correlation with mental health?

According to a study I found on hydration and cognitive function in children, I discovered that this might just be a correlation that is completely undermined in everyday human health.

My question is whether x variable (drinking water) has a positive, negative, or no effect on y variable (cognitive function).

The first study I looked at focused on different degrees of dehydration including none/mild, moderate, and severe.  At birth, humans are composed of 75% water.  By late childhood/early adulthood, humans have lost nearly 25% of this water.  When looking at dehydration in the average human, mild dehydration can mean as little as a loss of 2% weight in water.  Far too often we experience this 2% loss or mild dehydration.  Mild hydration can decrease performance level in tasks as simple as short-term memory, psychomotor skills, or tasks such as arithmetic ability or perceptual discrimination.  In this study, research participants were strategically dehydrated through either heat exposure or treadmill exercise.  Researchers found after observing participants post-dehydration process, that participant levels of concentration and tracking performance were significantly lower than before the dehydration process.  They also discovered that participants showed signs of increased tiredness and headaches.  Additionally, participants were asked to identify the color of an object.  The reaction time for this test increased post-dehydration, though participants still correctly answered.  What is notable about this study, is that cognitive function only continued to decrease as participants were further dehydrated.

In a second study that I found, researchers deprived participants of fluids for a total of 28 hours.  In the average participant, this caused for a 2.6% loss in body mass.  Researchers were unable to note a clear decrease in cognitive function, but the volunteer participants self-reported an increase in tiredness, decrease in concentration, effort, and overall alertness. 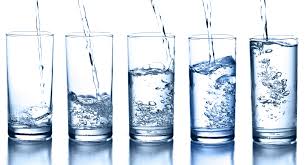 By looking at both of these studies, it can be concluding with a good deal of certainty that failing to stay hydrated, even within a single day, can decrease cognitive function.  I would argue that X and Y have a strong negative relationship.

What’s the practical takeaway then?  Stay hydrated, kids.  As we approach the end of the semester, keep a water bottle with you and refill it throughout out the day as you continue to drink water.  Staying hydrated won’t only keep you physically healthy, but it will absolutely help your mental/cognitive state.  My high school crew coach taught me a rule that I do my best to live by: drink half your weight in fluid ounces every day.

Who knows though?  Staying on top of your hydration game might just make the difference in that borderline A!

2 thoughts on “Can drinking water improve your grades?”