We’ve reached that inevitable point in the Fall where just about all of the leaves have fallen off of the trees. But have you ever taken the time to think about what happens to them after this? I mean yes, they obvious fall onto the ground or roofs or whatever seems to be below the tree branch. However, come Springtime they are nowhere to be found. Why is this??

If you were to ask me this question when I was younger, I probably would’ve ignorantly told you that the leaves melted away with the snow. Now that I really am thinking about this, I have become so curious as to how this happens scientifically.

Rain: The rain begins the process of the leaves’ disappearance. The leaves become weakened as the water droplets hit them, becoming packed into the ground. The addition of being stepped on or run over really help to compress them over time.

Bugs (ew):  Also while on the ground, the leaves get eaten by the many insects, worms and bacteria found within the soil. This allows for the leaves to go away (by being eaten) or be broken up into smaller pieces. 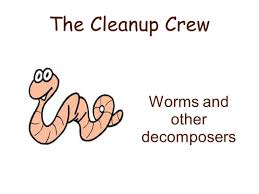 Fungi: The bugs aren’t the only ones doing all of the work! Bacteria and fungi help to break down the leaves as well. More specifically, mushrooms, which are in the fungi family, have roots which break down the cell walls of the leaves.

As a result of all of this, the waste from the insects release nutrients into the soil. All in all, the decomposition of the leaves help to benefit the soil and the plants within it. You can think of it as a cycle: the leaves fall from trees and eventually end up helping to keep the trees healthy and alive through the nutrients released into the soil; if the trees stay alive then they are able to grow leaves which will eventually fall once again next Autumn.

A side note: I also wanted to point out that this process of leaf decomposition can vary greatly depending on the environment, weather patterns, and type of leaves/trees. This study was done to assess and compare the rates and how long it takes for certain types of leaves to decompose. One of the observations made was that the leaves of deciduous woody species tended to decompose quicker than those of a summer-shedding evergreen. This is just a single example of how different species can differ in the amount of time it takes for their leaves to “disappear”.

If you are upset that the leaves are gone and Winter is right around the corner, do not fret because Fall, along with the lovely colored leaves, will be back before you know it. This would not be able to happen without the leaves falling in the first place.