I’m an At-Large Representative for the UPUA, Penn State’s student government. Despite the fact that most of the school are unaware of our presence, we do a lot of good work with the nearly $100,000 budget we operate with each other. A few weeks ago, we passed a resolution supporting the end of the blood ban on men who have sex with men (MSM). In supporting this resolution, I did a lot of work on the science behind HIV/AIDS. In light of today being World AIDS Day, I decided to explore this question on my blog.

In order to understand why exactly the blood ban is discriminatory, we need a better understanding of HIV/AIDS itself. HIV stands for human immunodeficiency virus, which, when left untreated can becomes AIDS – acquired immunodeficiency syndrome. Both are diseases that attack one’s immune system. After a certain period of time, the immune system becomes so weak that the period cannot fight off infections. While there is no cure for the diseases at the moment, today’s medicine has found a way for people suffering from HIV/AIDS to control their disease. 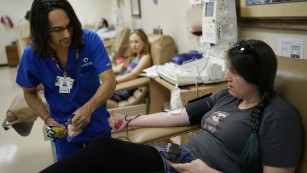 In the height of the AIDS crisis, MSM were banned from donating blood, as you can contract the disease is through the direct contact of bodily fluids, obviously including blood. The FDA recently updating their policy in that a MSM can donate blood if he has been celibate for a year. Many people believe that this fear of MSM blood is based purely on anecdotal evidence, as the possibility of diseased blood passing through a rigorous set of tests for disease is very slim. Granted, there is always the possibility of a false negative in these tests, but to single out just one group of people and keeping them from donating blood is just perpetuating the stigma that HIV/AIDS is a ‘gay disease’, as it was referred to in the 1980’s.

In light of the Orlando shooting, it has become more apparent than ever just how detrimental this policy is. We cannot be basing our policies off of anecdotal evidence and stereotypes, we must look at the data. HIV/AIDS is largely in control now, and even if someone with the disease attempted to donate blood, the screening tests would be able to pick that up.