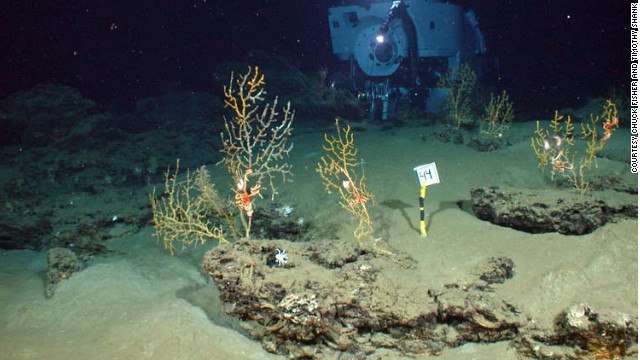 Chuck Fisher came to class Tuesday to talk about his marine research. Chuck is such an enthusiast, and has such great pics and yarns. Submersibles and cool animals and deep sea vents and black smokers and exploding oil rigs are all so visual. And Chuck does it so well.

He had a couple of messages for the students I really enjoyed. First, that he allowed his sense of fun to drive his career. Fun, people, NOT money. And so he’s had a ball, such a full life. It’s hard to tell non-scientists what motivates scientists; I barely understand it myself. Fame? Money? Curiosity? In my experience, fun is as good and as common a motivator as any. Second, that motivator led Chuck to useful stuff too, even though he never set out to do anything useful. He discovered animals which turned out to have a type of haemoglobin that is now used in artificial blood. His understanding of the ecology of deep sea vent communities in the Pacific has allowed him to advise deep sea mining companies – and the governments whose job it is to protect their chunk of ocean. And his technology and science made it possible to assess the damage the Deep Water Horizon explosion did to the Gulf fauna.

Student reaction after was very positive. I got the usual questions on the comment wall about whether this stuff will be in the exam (as Steve Jones once said, the question Professors most loath). But some students seemed inspired. Can’t ask more than that. Thanks Chuck.