The final exam went without a hiccup (cf last year’s fiasco!).  The only two questions which tripped a lot of students were the two covering material from the last week of semester, when attendance was shockingly poor. Obviously I take that as evidence that coming to class matters… The class average was 87% (B+) among the 319 students who took the exam. Seven students did not take it, three of whom look like they have dropped the course ($10 says I am about to get three emails with a variety of explanations for why I should exempt those students the final exam. If you are one of those, my response is here.).

The average performance was about in line with Class Test 4. Altogether, 72 students got 100% on my ask-28-questions-grade-out-of-25 algorithm. Again, no one got everything correct, but 14 students got 26/28. There were eleven fails. Setting the final exam into context, the picture looks like this (total number of students on the y-axis). 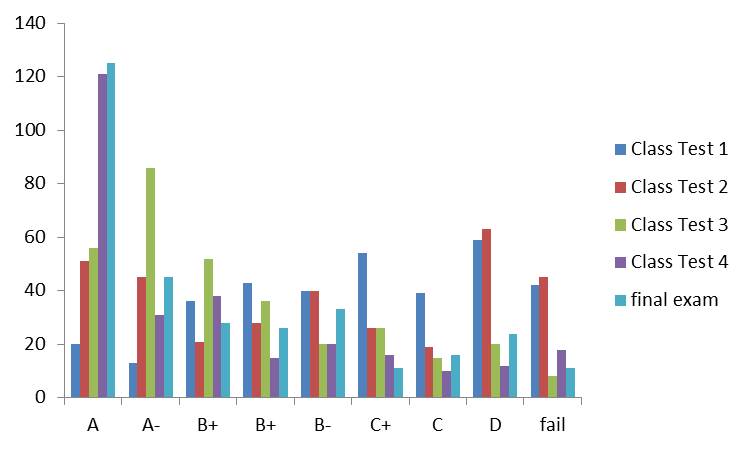 So all in all, lots of improvement over the year; not much in the week between Class Test 4 and the Final. I wonder if I should do away with Class Test 4? Probably not. Psychologically important I think. Plus it plays to my take the-two-best-of-four-tests algorithm, and my philosophy that students should be able to fall over once or even twice and, if they improve, not be penalized for that.