Dr Cavener, Dean of the Eberly College of Science came to class last Thursday to talk about creation and evolution, religion and science, as well as giraffes. The comment wall lit up with various questions. We didn’t have time in class for him to answer them all but over the weekend he sent me the following answers. I am particularly grateful that our very busy Dean took time out of his packed schedule for students that are most assuredly not in his College. 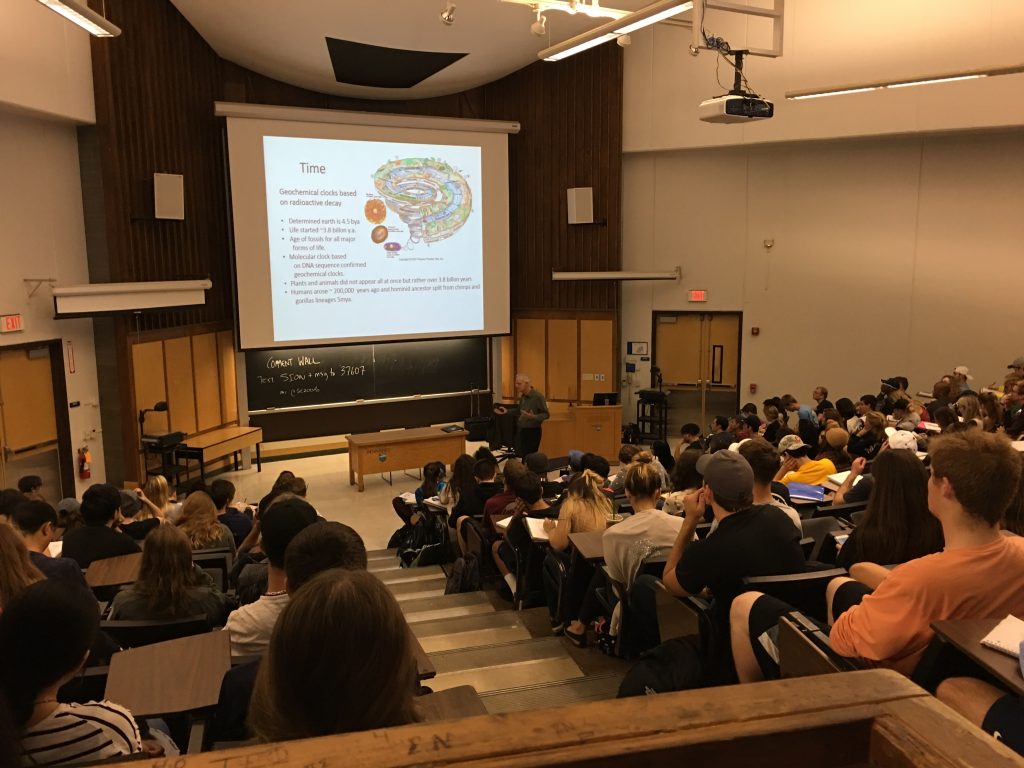 Was it difficult for you to change your mindset from gods creation to just evolution and natural processes?

The first step of accepting evolution was actually not difficult. However at the last step, where I decided that there was no evidence or reason to believe that god was involved any aspect of the origin of life, was more difficult.

Did your parents want you to go to college and how did you get there coming from such a small background/limited opportunities?

I only applied to a single college, which was a small christian college that was associated with the denomination of my church, so my parents were supportive of me going there.

What advice would you give to students who have ventured towards agnostic or atheist views who have very religious parents?

If your parents were like mine, it is pointless to argue and try to convince them of evolution. I let them know what my beliefs were and left it at that. Maintaining a good relationship with my parents was very important to me, and I always thought that keeping this relationship was much more important than trying to convince them that I was right and they were wrong.

Do you have any particular feelings about The Willard Preacher?

Annoying! But protecting his right to free speech is important. The first amendment is vastly more important that the second!

How did you major in evolutionary biology with the opposition of your parents? And how did they feel about you majoring in this field of science?

My undergraduate major was biology and my PhD was actually in genetics but much of my research was in the sub-field of evolutionary genetics.

What got you interested in science if you really didn’t have the opportunity to experience it growing up?

I didn’t develop a strong interest in biology until I took a gen ed course in biology in my sophomore year in college. Although I went to a christian college I had some outstanding biology and chemistry professors who were also intellectually engaging. I was very much attracted to the emphasis on critical thinking, hypothesis testing, and discovery that I found in science.

Is there something that happened in your life that specifically made you go against religion?

No not all. In fact for the most part I enjoyed the social and cultural aspects of religion and looked forward to going to church as a teenager. I was also my church’s organist. My transition from “faith to reason” was personal and intellectual; in the end reason won out.  Although I am an agnostic and don’t attend church, my moral and ethical beliefs are very much influenced by New Testament teachings of Jesus (e.g. “do unto others as you would have them do unto you”). So in many ways I see myself as a christian but not in the way evangelical/fundamentalists would accept as “being a christian”. However, I think that much of the current evangelical/fundamentalist religious practices and politics have become divorced from the New Testament and the teachings of Jesus.

Are you still religious?

See response to question above.

Are you glad that the church and the new pope have increased their beliefs in science in recent years? Does this steer you back towards the church?

Yes, I am pleased to see the new pope embracing reason and science. In contrast many of the leaders in the protestant evangelical denominations have become overtly anti science.

Do you still consider yourself religious or “believe” what the bible says?

Do you believe in God?

I am an agnostic. I have flirted with pantheism – the believe that god is nature. What gives me a deep sense of meaning and pleasure is the knowledge that I am connected with all of nature. The idea that we are a separate creation from the rest of nature is empty and depressing.

Why do people continue to believe?

Believe in god or creation story? Belief in god is central to identity and meaning of many people. I totally understand this. However, belief in the biblical creation story is a clear rejection of evidence and reason that is being strongly reinforced by the current leaders of the “religious right” by psychological intimidation. I should note that the level of psychological intimidation to conform is much higher now than it was when I was young, which was prior to the politicalization of the evangelical churches.

What did the church tell you about dinosaurs?

Some people said that dinosaurs were hoax (bones fabricated by scientists). Others accepted the fact that dinosaurs once existed but claimed that God created them at the same time “he” created all the other animals and that the dating of dinosaurs bones was incorrect. It was particularly a struggle for them to explain why dinosaurs weren’t described in the Bible as they must have co-existed with man according to their beliefs. You’d think that a free living Tyrannosaurus rex would have made an impression on the authors of the Bible!