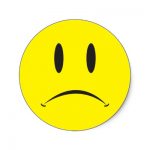 I don’t recall ever being quite so disappointed by a set of test results. I didn’t think the test was especially hard, and certainly no harder than Class Test 2. But the grades are down. The average score among those who took the test was 74% (C), down from 77% (C+) in the last class test and 79% (C+) in the first test. That is a trend so going in the wrong direction.

So what’s going on? Possible explanations:.

I want to do everything I can to help students over this bar. Except lower it.