(1) Collecting phones. That worked, but it’s a scene and a half. It could be improved on by collecting the phones when the students are in their seats. That would cut down on the time it takes to collect them. Returning 300+ phones would still be, well, a scene. 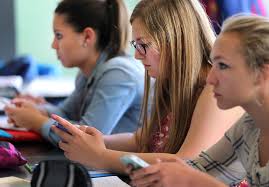 (2) Honesty. This was Julia’s idea: get the students to swop phones and sign a paper form to certify that they had their neighbor’s phone for the entire class. This worked very well the first time I tried it. The second time, when the students knew how the system worked, we had at least two cases that were most easily interpreted as outright cheating. But for that, I would have tried it a third time. Several students were mighty pissed that a couple of cheaters meant the whole class missed an opportunity for extra credit. Me too.

(3) Flipd. This is an app that students download. The download is free, but there is a one-off charge of $3 to actually use it for classroom credit. The instructor sets up the class times, the app notifies the students when to flip their phone off, and system lets the instructor see who has not used their phone during class. I like it because the phone still works, so people who need to be contactable (those with offspring in childcare for instance) don’t get excluded. But I trialed this app with the TAs; the four of us did not find it reliable enough to roll out to 350 students. It’s simple enough to use, but if you push the wrong button at the wrong time, the wheels fall off. I could just imagine endless emails of the  ‘but I was there’ sort. Many professors are making Flipd work and I am sure as the software comes on, it will be great. The $3 is a bit of a downer. Maybe extra credit for the price of a cup of coffee is something students would go for. Instructors can negotiate a class rate – I got it down to $2/student – but then the instructor has to pay ($2*350 students=$$$).

I discussed the various issues with Cristian Villamarin, the guy based in Canada who wrote the app and runs the company. He sent me a flier and a presentation on the system (I enjoyed that one of his slides came direct from the PSU discussions I blogged about). He’s been pretty interactive since we talked, putting me in touch with another PSU professor who has been using it successfully. Flipd is probably going to be the solution when the reliability kinks are sorted (Cristian says they are). I also like Cristian’s slogan summing up the aim of all this: Life is Like a Camera: focus on what’s important and you’ll capture it perfectly.

(4) Pocket Points.  This app is 100% free and students gain points they can use for discounts on food around town, so they are motivated to use it. But the problem is that it gives a list of ALL the PSU students using it on campus at any time (which can be many hundreds): you can’t get a list of just your own students. Moreover, it shows the list in real time, not who was there for the full class period. So while it is a great way for students to impose discipline on themselves, it is not going to be a way to use extra credit to incentivize self-discipline without a major overhaul.

I did not try a solution Bill Goffe pointed me to. Yondr is a hardware solution which even got a mention in the NY Times. Yondr told Bill they have a subscription model — $1.50/pouch/month and 4 undocking stations. Doug Paris at Yondr is the contact. This could be an interesting way to go, but the hardware aspect means one more thing for students to forget/moan about. 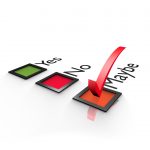 In all of this, there is a dilemma for me: phones can be good for active learning. I use PollEverywhere to poll students and to run a comment wall so they can text questions if they are too nervous to put their hand up. I think that is good option in large classes (not everyone likes to speak in front of 300+) and I hate clickers (and so do students). So how to balance those upsides of the ubiquitous phones with their toxic downsides?

Here’s a possible answer. After each of our three phone hand-ins/swops, I noticed fewer phones out during subsequent classes. Could it be that encouraging students to disengage from their phones just a few times in semester is enough to show them how much better off they are when they focus on the classroom……? Could just a few sessions be enough to show them that it is possible to leave texting and social media for a whole hour without the world ending? If so, Julia’s honesty system on a few well-chosen occasions might be enough. Is that too much to hope for?

I feel like there ought to be education specialists or teaching learning and technology specialists trying to sort all this this out. Surely none of this is rocket science.