Things that science cannot explain (yet)

Mona Lisa, one of the greatest portraits in the history of arts, embodies a lady of mysteries. The wife of a Florentine merchant, Lisa del Giocondo was believed to be the women in the painting. Famous for her enigmatic simile, Mona Lisa was created by the legendary Renaissance polymath, Leonardo da Vinci, whose “areas of interest included invention, painting, sculpting, architecture, science, music, mathematics, engineering, literature, anatomy, geology, astronomy, botany, writing, history, and cartography” (Wikipedia). Today, Mona Lisa is considered as one of the most famous paintings in the world. Once a precious painting among the king’s collection, it is now exhibited in Louvre Museum in Paris, France, and is also an object of intense selfies after iPhone was invented. But why does Mona Lisa’s simile attract so much attention? What is the secret behind her mysterious smile?

According to Artnet News, British academics announced that they have discovered the secret behind the smile of Mona Lisa by scrutinizing a recently discovered portrait called La Bella Principessa. A team of scientists from Sheffield Hallam University claimed that the ethereal “now you see it, now you don’t” effect of the Mona Lisa simile was “intentional on the part of da Vinci,” which they named as “the uncatchable smile” (Sfumato Technique).  The epiphany came when the researchers began to study La Bella Principessa, or Portrait of a Young Fiancee, which portraits the young illegitimate daughter of a Milanese Duke. To their surprise, it was found that La Bella Principessa bears a startling resemblance to the visual effect of Mona Lisa:  from certain angles, the lady appears to be smiling, but from others, the smile seems to have vanished.

According to the researchers, “La Bella Principessa‘s mouth appears to change slant depending on both the viewing distance and the level of blur applied to a digital version of the portrait.” Furthermore, “through a series of psychophysics experiments, it was found that a perceived change in the slant of La Bella Principessa‘s mouth influences her expression of contentment.” In the end, it was concluded that when we can see the delicate smile when we view from a distance or look into her eyes; however, if we watch close up or just focus on the mouth, the smile will then disappear. Manifest in both paintings, this effect was achieved through a special technique called sfumato, which means “soft” or “pale” in Italian. In other words, it was possible that da Vinci used “color and shading to create an optical illusion around the mouths.” This gaze-dependent illusory effect is extremely hard to accomplish, but given the Leonardo’s consummate artistic skills, it is not an unreasonable hypothesis.

Yet, some other studies disagree.

In December 2015, new revelation about the secret behind the Mona Lisa smile shocked the art world. Pascal Cotte, a French scientist who had studied the painting for more than ten years, claimed to have discovered a second portrait of a woman hidden beneath the masterpiece. By relying on multi-spectral scanning technology, which “projects intense lights on to the painting while measuring the reflections,” Cotte was able to pry into the paint layers in minute details (CNN). A computer reconstruction of the woman beneath Mona Lisa. Credit: BBC

My scientific imagery technique (L.A.M.) takes us into the heart of the paint-layers of the world’s most famous picture and reveals secrets that have remained hidden for 500 years,” Cotte remarked during an interview. “I prefer to see [Mona Lisa as] a fluid evolution from a relatively straightforward portrait of a Florentine women into a philosophical and poetic picture that has a universal dimension.” The subtle smile of Mona Lisa has enchanted the art world for centuries, but does it really belong to an entirely different woman? We may never know the truth.

In mathematics, the golden ratio refers to a special equality, where (a+b)/a=(a/b), as shown in the picture above. 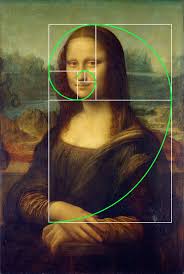 Aesthetically speaking, the geometry with golden ratios always seems to be visually appealing to human eyes, and many great artists, including da Vinci, are known to, intentionally or not, take golden ratios to their advantages. According to What Culture, it is found that golden ratio can “produce a sense of beauty and balance, which might explain quite why people are so obsessed with the Mona Lisa, besides all these hidden bits and bobs: the face of the Mona Lisa, fits perfectly into a golden rectangle, as does the entire portrait.“

Therefore, one plausible reason that everyone loves Mona Lisa is: Math!

3 thoughts on “The Secret behind Mona Lisa’s Smile”