While reading the chapter on visual rhetoric and how certain artists/creators can do things specifically to gain attention or a response, I was brought back to themes that have been discussed in both my art history and my literature course this fall.   One thing that has really stuck with me is the idea that nothing in art is ever an accident; the artist has always planned every aspect of his or her work out exactly.

One of the pieces for which this was true for me was a World War II propaganda piece which depicts Adolf Hitler as a knight in shining armor. 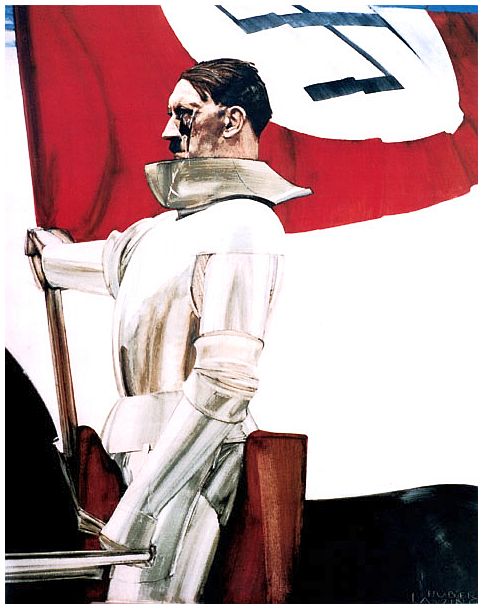 With this image, so many things are going on, just as were discussed in “Compose, Design, Advocate.”  First of all, the image draws off of common knowledge of the audience.  The Nazi flag in the background quickly establishes the audience itself, as the German people, and gives the knight an evident source of loyalty.  This also establishes the ethos of the artist himself, as the person clearly supports Hitler and the Nazi regime.  In addition, the flag is very bright and contrasts greatly with the mostly neutral colors of the rest of the image.  This is most likely done to draw the viewers’ eye immediately to the flag itself and to quickly establish the position of the artist.

Furthermore, the Arthurian knight-in-shining-armour image was a well known image in Europe as the legends surrounding King Arthur spread from Britain across the European continent even in the 14th century.  In this way, the creator of this piece is drawing a specific parallel between Hitler and King Arthur, two men who came into power in the hopes of changing power structures and society itself.  This connection will immediately create a logical response within the audience who has most likely grown up with some knowledge of the Arthurian legend (even I read about King Arthur in my ninth grade English class).  Even if the King Arthur comparison is not immediately evident, the image of a knight marching to battle will not only inspire the viewers of this image, but will also give them a sense of purpose and increases the intensity and necessity of the changes in the era.  In this sense, the artist is effectively using an understandable image to create a logical purpose and story for this image.

Though I have been looking at many different pieces of art in my art history class, this one stood out to me when it was shown in my literature class (about the Arthurian legend, in case you couldn’t tell,) the other day because this really is a piece of visual rhetoric.  Propaganda is used by countries and regimes all the time in order to encourage people to buy into a school of thought and support the ideas they are espousing.  This piece does that in carefully calculated connections and color choices.

This entry was posted in Uncategorized and tagged RCL, rcl1213. Bookmark the permalink.