The law is that you can only have two of these three attributes in speaker building.  Ideally we would want all three, we want speakers with good bass, can play really loud, and are small.  Unfortunately we cannot have all these.

It usually goes hand in hand that speakers with good bass are fairly large (ie subwoofers etc), and this is because different speakers require different volumes of air behind them which is described by the Thiele-Small parameters (more details in future posts).  The volume of the box behind the speaker effects the way it produces noise below 1kHz, which mainly is composed of drums, guitars, a bit of spoken word, etc.  Imagine blowing air across an empty soda bottle; it produces a low tone.  When the bottle has more liquid in it and has a smaller volume of air, it produces a higher tone.  Above 1kHz the volume is so small that it doesn’t need to be taken into account; a similar principle explains the why behind the box size behind speakers.

Assuming two different speakers are of equal quality, the more sensitive speaker will require a larger volume of air than the less sensitive speaker (just trust me at this point).  An anecdotal example: I built some bookshelf speakers with a 3.5″ driver that requires only about half a cubic foot of air in the enclosure; it had a fairly low sensitivity of 83.5dB.  I am currently designing another pair of speakers, which has about the same amount of bass, but requires five cubic feet of air in the enclosure, ten times the other pair!  It should, however, be noted that these new speakers will have an insanely high sensitivity of 98dB.  Using some math from my previous post, if my new pair is playing at 4w of power, my old speakers will have to be using about 64 watts to play at the same volume!  By the time these new larger speakers reach 64 watts of power (upper limit of clean power from most receivers), the old speakers would require over 4000 watts and would have burned out long ago! 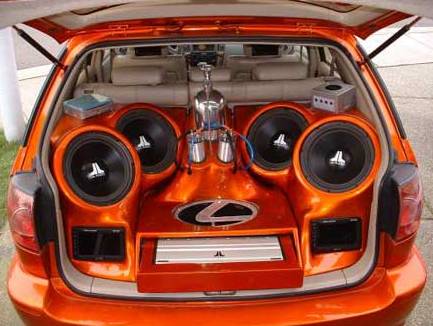 This entry was posted on Thursday, January 24th, 2013 at 2:42 pm and is filed under Uncategorized. You can follow any comments to this entry through the RSS 2.0 feed. You can leave a comment, or trackback from your own site.