A natural event that has been occurring since the formation of Sun, planets and stars are solar and lunar eclipses. We are able to observe these eclipses on a regular basis and have data from hundreds of years of observations. Eclipses occur when the Sun, Moon and Earth line up on the same astronomical plane producing a shadow either on the Moon or the Earth.

Specifically for a solar eclipse the Moon is in between the Sun and the Earth from the Earth’s point of the view the Sun will be either partially or entirely blocked out by the Moon. The different types of solar eclipses include total and annular eclipse and a hybrid when it switches from one kind to the other based on the Earth’s curvature. A total eclipse is when the Moon has completely obscured the Sun causing the corona and solar flares to become visible. An annular eclipse is when the Moon is farthest in its orbit from the Earth causing the sun to only be partially blocked out with a thin ring visible.

A lunar eclipse is when the Earth will cast a shadow on the Moon and indirect sunlight will cause the Moon to subtly illuminate and often turn orange or brown in color. There are three types of lunar eclipses; penumbral when only part of the Moon is blocked from sunlight, partial where a portion of the Moon passes through the Earth’s shadow and a total lunar eclipse when the entire Moon is covered in shadow.

These astronomical events can be observed by anybody at any time, however lunar eclipses are more likely to been seen when they occur, depending on if you are on the right side of the Earth at the time. Solar eclipses are hard to see because the shadow that they cast gets gradually narrower as it travels towards the Earth. From this only a small section of the Earth is actually in the shadow and with roughly seventy-five percent of the Earth being ocean, they are hard to see. The next solar eclipse that we might be able to see, or at least the tail end or beginning will be on August 21st, 2017. 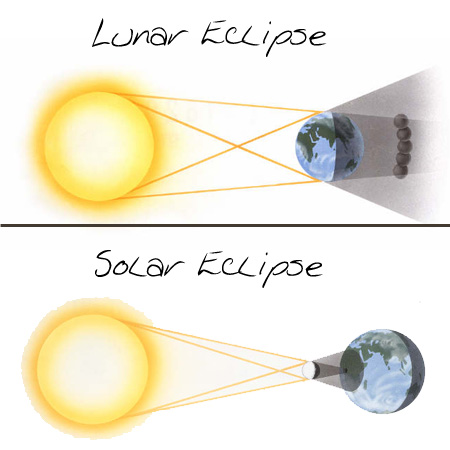