There are a lot of tasty mixes in this world: peanut butter and jelly, chocolate and strawberries, tomato soup and grilled cheese, the list goes on. However, on the other side of the spectrum, there are some distasteful combinations as well. One of the most known mixes to stay away from is the infamous orange juice and toothpaste. As I picked up some orange juice before class and right after brushing my teeth, I instantly regretted taking a sip as a foul taste spread across my taste buds, and wouldn’t dissipate for several hours. The taste is extremely bitter, causing an inevitable sour mouth expression. As I suffered from this fatal mistake, I wondered to myself, what causes such a bitter, awful taste in one’s mouth?

This mix has had caution signs up as long as I can remember. My mom used to tell me to wait at least 15 minutes before drinking my orange juice at breakfast. I was of course always persistent and drank it anyway, soon to be punished by my own mouth’s acidic bitter taste. As I continue to make the same mistake over and over I have decided to do the research. I asked myself questions as I read:

Based on research done by this article, a finalized conclusion has not been reached on this topic, since taste is so intricate, but just like other science, there is research and observation that take place to gain a close valid conclusion. Our taste is a big unknown, filled with different categories of taste, and not to mention no two person’s taste buds are exactly the same. As the author states, we taste things from the molecules and receptors interaction on the human tongue. Toothpaste is filled with a substances calle d Sodium Lauryl Sulfate(SLS), which is a additive which creates the foaming and bubbles of the concentrate. Not only does it create this bubbly sensation, but it also reduces the taste of sweetness in the mouth, destroying fatty substances present in one’s taste buds, called phospholipids. Orange juice has a sweetness component in its taste, which would explain why this contradicting would occur. Toothpaste also contains stannous fluoride, a form of medicine or mixture in the dental world that prevents decay, bacteria, and activities in individual. As this toothpaste combines with the acetic acid and sweetness prevalent in orange juice, it leaves a lingering bitter taste on the human tongue.

A particular study, written by author Allison Chambers gives an interactive representation of the flavors and reactions after the use of toothpaste, particularly strongly methylated toothpaste.

In this study, participants a series of food products including orange juice and tested taste and how long it would linger after brushing your teeth in the morning.(anecdotally) Participants used in this experimental procedure brushed their teeth and waited in a series of either 4,12,30, 60 minutes. A more  60 minute interval represented the control trial, waiting this time interval before drink/food consumption.This is to ensure that all particles and residue of the food products. After the individuals brushed their teeth and waited their individuals of time, and the control group waited until after the 60 minute interval, making it a valid comparisons of taste. After the brushing and consumption of juice, and evaluated the tastes, repeating the trial 2-3 times.

This was represented as a correlational study, comparing the effects of substances, in this case orange juice, combined with toothpaste residue. The results concluded that out of a 15 point scale, those who waited longer intervals, had less of a bitter/sour taste of the combination. Waiting 4 minutes was a score of 8.5, 12 minutes was an 8.0, 30 minutes was a 7.5, and 60 minutes was a 7.0. However this does always conclude that this bitter taste combination can linger for over an hour before taste goes back to normal levels. This was also the strongest reaction out of food/beverage products used. However, the result came out as anecdotally for this particular study. Lastly, it would not be due to reverse causation due to the bitter/sour taste arising from the mixture of orange juice after t 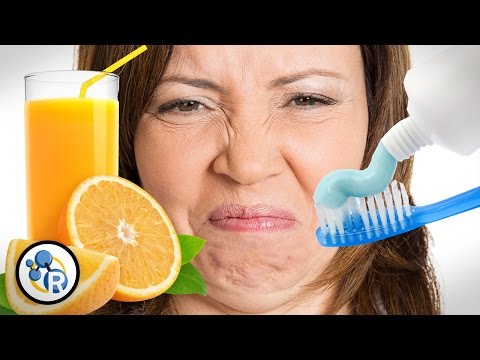 he toothpaste residue was already in the mouth.

Although it is evident that orange juice and toothpaste vividly create a bad taste, this study is done on a strongly methylated toothpaste, not your average Colgate. We cannot assume the study would reach the same conclusions, but based on the average individual’s experience and the study done here, we can conclude the reasoning behind the horrid lingering taste.